I am incredibly excited about this edition of Kickstarter Report! The last item in the article (it’s a surprise) is an expansion and an update to one of my very favorite games! Also in this edition is an awesome looking new post-apocalypse game! Only two items; short and sweet! The game titles at the beginning of the entries are links to the Kickstarter campaign pages for the listed games, and there are links at the end of each entry as well!

Posthuman is a fantastic looking post-apocalyptic  mutant game, where humanity has mutated and they are (of course!) trying to kill what remains of us! From the Posthuman Kickstarter campaign page:

“In Posthuman you play as one of the last human survivors in a world where nature is reclaiming the planet and our mutated offspring are working to eradicate us. Will you resist mutation and survive, or give in to the inevitable and join the mutants?

In the game, players start off as humans on a solitary journey to a rumored fortress harbouring a community of humans.  To reach the fortress the players need to complete ten zones successfully. These zones are found on tiles of varying terrain that are drawn by the players as they explore the world.  On their travels the players have the opportunity to meet other human players to trade items and use beneficial skills on each other. They will also encounter randomly drawn mutant adversaries and be assailed by players who have switched to the mutant side. Encounters with mutants may inflict scars, and the more scars players have, the closer they will be to mutating and switching sides. Will they strive to cling to their humanity and make a run for the fortress, thus winning the game? Or will they give in to the ever more tempting mutation, join the mutants, and deny the win from the rest of the humans?”

The components of the game look great and game play is truly interesting! As always, Rahdo has made a great and informative video (in this case multiple) about Posthuman. I highly suggest you give it a watch. 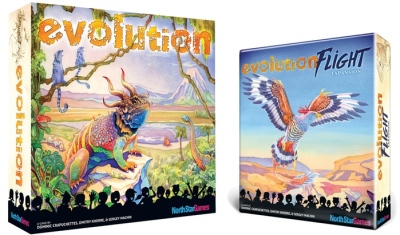 Sometimes a game on Kickstarter gets me interested. Sometimes, a game gets me interested enough that I want to help advertise it in my Kickstarter Report article here on FDR. Sometimes, I visit the Kickstarter page of a game and I stare just long enough to recognize its awesomeness before I start clicking the ‘Pledge’ button over and over again. The Second Edition (updated text and art) of Evolution, and the Evolution: Flight Expansion combo campaign is definitely one of the latter. Anyone who has seen my review of Evolution (link below) knows that I love the game, and I cannot wait to get my paws on the Flight Expansion. Yes, I have already pledged!

North Star Games was also kind enough to list my review of the original game, give a blurb and link to my video review. To me, this is irrefutable proof that the folks at North Star Games are kick-ass people, which I had already highly suspected due to the quality of Evolution and Wits & Wagers, two games that I thoroughly enjoy. (NSG, you guys rock!)

“Evolution is a board game that plays in 60 minutes for 2-6 players ages 10 and up. In the Evolution game system, players adapt their species in a dynamic ecosystem where food is scarce and predators lurk. Traits like Hard Shell and Horns protect your species from Carnivores, while a Long Neck help them reach food others can’t.

The first edition of Evolution was a finalist for the Escapist’s 2014 Board Game of the Year and four-time Golden Geek nominee. This Kickstarter campaign improves the system with two major releases:

Evolution (Second Edition) – With the benefit of feedback from thousands of plays, we’ve figured out how to make an already-great game better. Most of the cards have been changed to some degree, leading to a better experience for first time players and a more rich experience for tournament players. Catherine Hamilton was also commissioned to paint additional backgrounds for 9 of the 17 cards cards.  Don’t fret if you have the 1st edition of Evolution.  Just back the Flight expansion and you will get a set of the updated cards for free!  (see below)

Evolution: Flight Expansion – this expansion enriches your experience by giving you the ability to create avian species. Flight gives your creatures enormous advantages, like the ability to evade non-flying predators and soar to a new location when food is scarce. But it also has a cost: avian creatures have to eat an enormous amount of food to maintain those advantages!

FIRST STRETCH GOAL UPDATE: Anyone who purchases the Flight expansion will now get a full set of the 2nd Edition cards!”

The last part of that paragraph is great news! Anybody who backs the Flight Expansion will get Second Edition update cards for their copy of Evolution included! I cannot wait to see the Stretch Goals that are unlocked during the campaign!