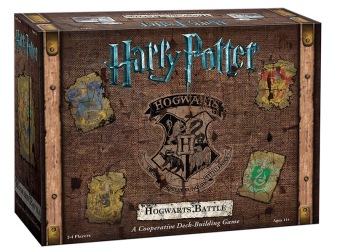 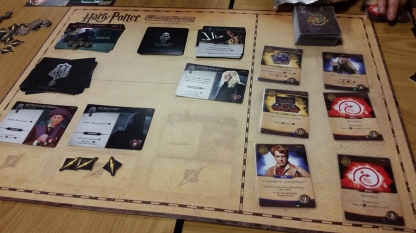 Each player takes on the role of one of the heroes of Gryffindor House; Harry, Ron, Hermione, and Neville. Each hero has a unique ability that can be activated in different ways. For example, Harry can add to a hero’s attack power the first time each round that a Villain Control Token (metal components) is removed from a location.

Players win the game by defeating all of the Villains for a certain scenario, known as ‘years’. Just as with the movies, the game is divided into 7 different playable years. Each year has a different setup, and in some cases different components to use. Players lose the game by having all of the year’s Locations get taken over by Control Tokens. Control Tokens are placed on Locations due to certain conditions, such as players getting knocked out and Villain abilities.

On each player’s turn a certain number of Dark Arts cards are flipped over. These cards can affect only the active player, all players, or even activate certain Villain abilities. This adds to the feeling that it is a team effort as a player can lose cards from their hand, take damage, and be forced to make difficult choices on every player’s turn. As with many cooperative games, the game is much easier with fewer players and gets increasingly harder with 3 or 4 players.

One of the best things about Hogwarts Battle is how the game changes over the course of the different years. Cards are added in the form of new spells, new allies, new Villains, and most importantly new components. Starting in year 4 players (and Villains) have access to the House Dice. There are 4 dice, each representing 1 of the 4 houses of Hogwarts, that can greatly aid the players. Each House Die has a higher probability of a different effect. Slytherin, for example, has a higher possibility of doing damage. Of course, the Villains can use these dice at times as well and this is a great threat to the players.

The components are very high quality, from the cards to the tokens to the wonderful House Dice. The game is quick and incredibly easy to learn as well, making it very accessible to Harry Potter fans whether they be an experienced gamer or not. The spell cards are also a nice addition since in most deck builders cards are strictly physical objects. These intangible cards are a nice change, even if the spells do not really match what the spells would really do in the Harry Potter universe. Instead they mostly focus on the game’s 3 “currencies” in various combinations; these are damage, buying power for new cards, and healing.

I really enjoyed played Harry Potter: Hogwarts Battle. The game was fast paced with very little downtime, and the different player abilities lend themselves well to different styles of play. During the Year 4 game where I played Harry I was dealing a lot of damage to the Villains, while Neville was our resident healer.

The artwork for the game is mostly stills from the movies, but one thing that I loved was how the player’s portrait cards changed as the actors playing the characters aged depending on what year is being played. Again, all of the components were very high quality.

Hogwarts Battle will have a huge appeal to fans of the Harry Potter universe and people who play entry to mid-level deck building games. The game inspired a ton of nostalgia for me, so much in fact that I marathon watched several of the movies after playing it. The game will most likely not appeal to players looking for a deeply strategic deck builder… unless they are Harry Potter fanatics, of course!