As always I am on the lookout for great Kickstarter board games, card games and gaming accessories to share with everyone! I’ve found three more that I think are worth taking a look at. One I think might be new to even those who keep up with board game news across the web, and the other two might be more familiar. No matter what, show your support by checking out these (and all the other) board game campaigns on Kickstarter. Let’s make sure we keep a lot of great games coming through the pipeline. Click on the entry titles or the links at the end of each entry to visit the games’ respective campaign pages!

Like exploration games? Like survival games? Think a mashup of Betrayal at House on the Hill (without the betrayal part) and Robinson Crusoe: Adventures on the Cursed Island sounds awesome? If you answered yes to any of these questions then you should check out The 7th Continent!

Not only does the artwork for this tile laying game look amazing, but it also includes fantastic miniatures! The game promises real consequences as players attempt to survive off the land and explore this continent to lift a curse placed on them during an earlier visit to the island. As the land is explored tiles are laid down and the continent grows before your eyes. So what about those consequences I mentioned? From the Kickstarter Campaign:

“The game remembers your actions. If you kill a NPC, he will remain dead for the rest of the game and any option that you would have had by letting him live will be gone… forever!”

Some more quick facts about the game:

A little more from the campaign page to get you excited:

“If you want to live through the many dangers of the 7th Continent and lift your curse, you will have to use all your survival skills: craft items, hunt and fish to get food, learn how to benefit from your environment, spend experience points to acquire new abilities, etc.

Unlike other board games, The 7th Continent will take you through many, MANY hours of adventure as you explore the continent to lift your curse… or die trying! To make this manageable, the game includes a simple yet effective save system that allows you to quickly interrupt the game at any time and have it ready for your next session, just like in a video game.”

Another cooperative game joins this list in Spirit Island! In this area control game players take on the roles of elemental spirits (including Thunderspeaker, Bringer of Dreams and Nightmares, and Vital Strength of the Earth) and along with the native villagers of the island attempt to drive off destructive, colonial settlers who have landed. The game looks great and the premise interests me greatly!

From the Spirit Island campaign:

“In the most distant reaches of the world, magic still exists, embodied by spirits of the land, of the sky, and of every natural thing. As the great powers of Europe stretch their colonial empires further and further, they will inevitably lay claim to a place where spirits still hold power – and when they do, the land itself will fight back alongside the islanders who live there.

Spirit Island is a cooperative, settler-destruction strategy game for 1 to 4 players designed by R. Eric Reuss and set in an alternate-history world around A.D. 1700. Players are different spirits of the land, each with their own unique elemental powers, forced to defend their island home from colonizing Invaders spreading blight and destruction. Work with your fellow spirits and the native islanders to increase your power and drive the invading colonists from your island in this strategic area-control game.”

“Those were cutthroat times and these otherwise reasonable scientists did whatever it took to stand out from their peers. Sabotage and other notorious acts were not uncommon.

In The Great Dinosaur Rush game, some actions will gain players notoriety – secret tokens ranging in value from 1-3. Notoriety is revealed and added to players’ scores at the end of the game. But the player with the most notoriety is called out and their notoriety is subtracted from their score!” 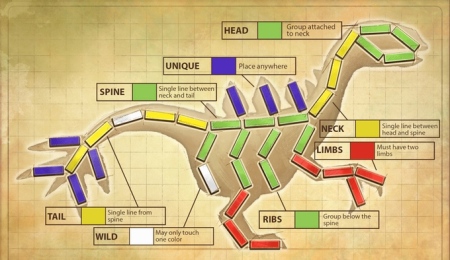 According to the campaign the different dinosaurs are built behind player screens, and the screens themselves provide guidance to dino-construction. Dinosaurs can be totally made up (following the guidelines still, of course) or they can conform to bonus cards to score extra points.