Are you bananas for politics? Did you get WAY too involved in the recent U.S. Election? Did you unfriend a bunch of people because they voted for a different candidate than you? Then Elections of US America Election may or may not be for you depending on how crazy you are! *WARNING – Sense of humor required to play this game!* 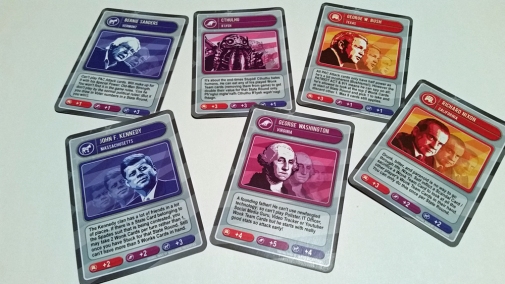 First things first – players choose from a number of current real world, historical, and fictional candidates. The game suggests that the candidates be assigned randomly, but that’s definitely an area that can benefit from house rules. We’ve done draw 2 and select 1, random assignment, and selecting our own. It all works fine.

Candidates belong to one of three political affiliations; Democrats, Republicans, or Independents. Each candidate also has a home state which give them an advantage there, abilities, and stats. The stats represent how much that candidate appeals to voters of each political affiliation. The descriptions of the candidates can also be funny and lampoonish. This was the first thing I liked about Elections – it pokes fun at all parties, candidates, and voters equally.

The majority of the cards in the game are called ‘Wonks.’ Players can use Wonk cards during the State Rounds (the meat of the game) to boost their candidate’s appeal towards voters (as seen attached to Bernie on the left in the photo above), damage the appeal of the other candidates, or give themselves an edge during the current round.

In Elections it all comes down to the votes. Players are competing to win so many electoral college votes. In the full game it’s 270, and in the short version of the game it’s only 70. I highly recommend the short game for new players. The full game can take quite a while, especially with 4+ players, and I have found the the short version gives just as much enjoyment. The full, accurate-number-of-votes game is there for those who revel in politics and/or long card games however.

On a player’s turn they reveal either a certain number of small states (based on the number of players) or a single large state. The appropriate number of voter cards are laid out based on the state(s) drawn, and then players do their best to gather the most voters. Each voter card has a required appeal and candidates must meet or exceed this number to take them. Players with the most voters take the states (the game goes into how to divide them amongst winners) and the electoral votes are added to the players’ totals.

During the state rounds (which repeat until someone reaches the required number of electoral votes) players try to improve their own campaigns, railroad their opponents, and may encounter a scandal or two along the way. The rounds can be exciting, especially when a certain voter demographic or state is at stake. In my experience people really want to win their home states, of course.

Elections of US America Election was a Kickstarter game, and it does look the part. The card design is nicely done but there isn’t a whole lot of unique artwork for the fronts or backs of the cards. Since the cards are made up of a good deal of text though, I found myself focusing more on the stats than on the aesthetics. While I could get past this, it might bother other people. 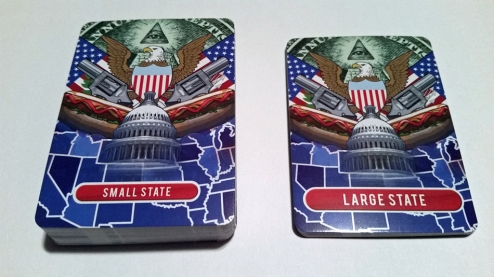 The cards are of good quality and the game is incredibly easy to teach, making it appropriate for sharing with one’s political, non-gamer friends for a laugh. I have played it multiple times now and it has been fun each time, especially in the current political climate. Just make sure you do not play with someone who takes politics too seriously.

This game is all about recreating an election using real world events, people, and references… but in a fun, light-hearted way. If you’re into politics and want to do exactly that then you might want to check out Elections of US America Election.