If you like card games and are interested in economic models then do I have the game for you! Don’t know anything about economics? Don’t worry, you’ll be fine. Smart Money Maker is a game about fixing the mistakes of the old economic model with newfangled ideas like crowdfunding, email, and…lobbying. Lobbying? Sounds complicated, right? Well, it’s actually pretty straightforward.

In Smart Money Maker players are working together (sort of) to pay off bills, taxes, bankruptcies, loans, and overdrafts. So what’s the rub? If players do not pay all of these off then everyone loses and the game is the victor. If the task is completed however, then the player with the most money at the end is the winner.

The game can be played in 30-45 minutes and says that anyone 10 and up can grasp it. While I did not play it with anyone in that age range I feel confident saying that that might be a little bit of a stretch. Smart Money Maker isn’t overly complicated but I do not think that children of that age would fully grasp the intricacies. I’m not saying that they couldn’t play it, but it might be a little much. As I didn’t test the game with that age though, that is mostly speculation. On a side note I think this game would be great for high school students.

Here’s something that I do not get to say very often; this game fills a niche in modern gaming that is underdeveloped, and that’s “full-length” card games. Most card games last 10-20 minutes but Smart Money Maker lasts double that and feels less like a filler and more like an actual game, despite the fact that the components are 100% cards.

Speaking of the cards they are of a very nice quality. The cards shuffle well and I haven’t noticed any deterioration after multiple plays. The artwork is basic, but has a sort of charm to it. Once you learn the different symbols and card type layouts, you almost stop seeing the artwork altogether and focus more on the meaning of the cards. I’d like to think that this was the designer’s intent. 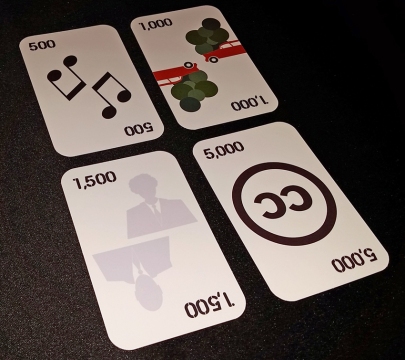 Smart Money Maker is a great game for anyone who likes meatier card games, economics, and/or small box games in general. Modern games can have themes that are off-putting to non-gamers, but everybody understands money and paying off debt. Smart Money Maker is a game that could flourish at just about any gaming table. The delicate ballet of working together to make sure someone wins versus hording money to give yourself a chance of victory gives the game a nice balance and tension that any gamer can appreciate.

Smart Money Maker is a Kickstarter game by Laurence Humier, and you can purchase the game and find more information by visiting her website here. You can buy Smart Money Maker on Amazon as well.