I’ve actually had a little time to play some great games lately; trust me, no one is more surprised than me! To make up for a little lost time I’m including 4 games in this posting rather than the usual 2 or 3. All four of these games were a big hit with me and worthy of your time. Enjoy! 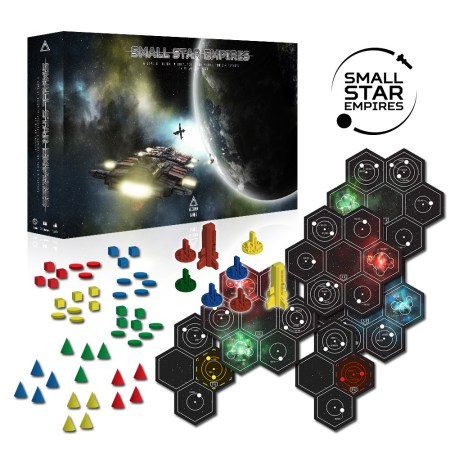 Archona Games was kind enough to send me a prototype copy of Small Star Empires to review and I recently had a chance to play it. In fact, I meant to play it only once at my FLGS’s board game night, but we enjoyed it so much that we played it twice! SSE is going to be launching on Kickstarter in just a few short weeks and I’ll post a link to the campaign when it does. I’ll also be shooting and uploading a video review of the game soon!

Trudi, Tim and I sat down to play SSE and instantly this eruo-style, space-themed game drew us in and we turned into cutthroat, scheming space barons, plotting against each other. We set up the modular board and began to expand our empires. 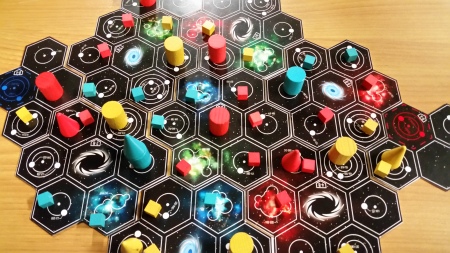 Again the game board is made of modular tiles made up of systems, each represented by a hexagon (click on the image for a larger version). Players take turns moving their ships (cones) and taking control of whatever system their ship stops in. You can do this by placing either a trade station (cylinder) or a colony (cube). Since players can’t move through an opponent’s system it soon becomes a battle of wits rather than of solely expansion. Ships can get blocked in and become unable to move, and entire portions of the map can become unreachable. 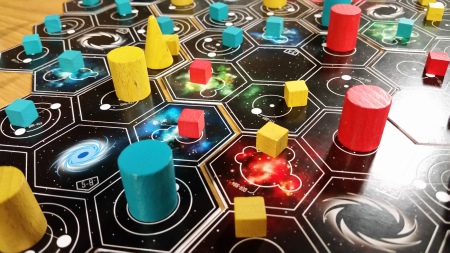 I did well during the first game, but I was way too eager during the second. I sent one ship out to claim some prime real estate and didn’t notice that my opponents had completely boxed my other 2 ships in. This happened VERY early in the second game and I was at a major disadvantage. That didn’t stop me from having a great time though!

Turns in Small Star Empires are fast and games are quick. What seems like a large playing area gets congested fast and before you know it players are out of moves and scoring begins. The strategy draws you in completely and I, for one, love that type of game. Small Star Empires is highly engaging, easy to learn, and quick to play; on top of that, the artwork for the game tiles is beautiful. I will most definitely be backing this game when the Kickstarter Campaign launches!

Outcome – I lost both games with Trudi and Tim each taking a victory. I blame the losses on naivety in the first game and my friends being butt heads in the second.

Tim, Cam, Blake and I decided to try Specter Ops, a game belonging to Cam. Owning the game Cam normally was stuck playing the Agent, an invisible force of mischief who moves around the board (mostly) unseen, so he didn’t want to be “it”. I, being the sort of person who loves hidden roles and being sneaky, volunteered. Bad choice.

Having never played the game I was ill-prepared for the manhunt that was about to ensue… Cam and Tim, both having played before, chose their favorite Hunters and were joined by another newbie to the game, Blake. In Specter Ops the Agent moves using a sheet of paper which corresponds to grid lines on the board. For example, B6 on the Agent’s sheet means that he/she is at the space on the player board marked B6. If a Hunter gains line-of-sight to that space then the Agent becomes visible and the miniature is placed on the board. This will also more than likely mean that the Hunters are going to get a chance to attack the Agent.

Both the Agent and the Hunters have special abilities that help them evade Hunters and hunt down the Agent respectively. The Agent’s goal is to activate 3 of the 4 random objectives on the board (these are invisible to the Hunters but known to the Agent) and escape, and the Hunters are simply trying to find the Agent and kill it. It’s a game of cat and mouse to be sure, and one that I was not prepared for.

I used my one time abilities a little to soon, seeing as how I didn’t know the definition of “trouble” in the game. When the agents were close but not that close I would use them, not knowing that eventually I would be hemmed in completely with nowhere to go. My Agent was equipped with smoke grenades, bursts of speed and flash bangs, but I squandered them like the newb I was to Specter Ops! I’m looking forward to trying the game again with my new found experience.

Outcome – I managed to activate 2 of my needed 3 objectives, but the much more experienced Cam and Tim were just too clever for me. My Agent, Spider, was squashed under the Hunters’ merciless persecution!

Welcome to the Dungeon

Welcome to the Dungeon is a press your luck game where players take turns manipulating the dungeon setting. The last player to pass their turn then has to run through the dungeon encountering the enemies that the players placed in side, and with the disadvantages the players have caused as well. The upside to running the dungeon though, is that you can’t win unless you do (except in the highly unlikely scenario where all other players are eliminated).

On a player’s turn he might seek to make it harder for someone else to navigate the dungeon so he takes a powerful weapon from the adventurer’s equipment pile. However, the other players seeing this might all pass their turns and force that same player to run it himself. There’s more to the game than that, of course, but that’s it in a nutshell. There are multiple types of enemies and 4 adventurers who have their own unique equipment. Don’t stack the odds too heavily against the adventurer though, because it might turn out that he’s you and you’re forced to brave the dungeon!

Outcome – Blake was a turn passing machine who never ran the dungeon. Tim ran twice and was eliminated. Cam won. I ran through the dungeon three times; the first time I was lucky and beat it, but on the second and third time… not so much.

GemPacked Cards is a Kickstarter game that I backed last year. It came in the mail recently and I was super excited to try it out. Trudi and I went head to head in this beautiful, colorful card game at board game night at The Jester’s Court!

GemPacked Cards by Pencil First Games plays a lot like Splendor, but is suitable for both adults and children and different enough to be its own game. The game pieces are circular pips and square cards. The pips are the basic currency with the cards being mostly “squares’ and “diamonds”. Pips are used to buy squares and squares are used to purchase diamonds, with the squares and diamonds being worth victory points at the end of the game. All 3 are used to purchase rocket cards that are worth even more victory points.

The game is unique in that the colors of the components are very important. For example, purple pips are used to purchase purple squares. Purple squares are used to purchase purple diamonds. If you don’t have 2 purple pips (the cost of buying a purple square) then you can use the appropriate color pip combinations instead. A red pip and a blue pip can be substituted for the 2 purple pips. A red square and a yellow square can be substituted for the 2 orange square cost of buying an orange diamond.

I had a lot of fun playing GemPacked Cards, and so did Trudi, and the game plays very smoothly. It is highly engaging because of the color substitutions, and these keep you on your toes when taking your turn. It doesn’t hurt that the art in the game is gorgeous either!

Outcome – The board game gods must not have been paying attention because I managed to win… barely.