This edition of Kickstarter Report features the ever-popular metal dice campaign, a modern classic that is nearly impossible to find, and new mythology-themed game that looks amazing! As always, click on the titles of each entry (or the link at the bottom of each) to jump over to the official Kickstarter Campaign pages.

Santorini is a Greek mythology inspired city-building game that features a 3-D playing area and some amazing artwork to boot! The game promises a quick learning time, short game play time, simple rules and powerful player powers granted from gods and other mythological characters. The reviews on the campaign page are absolutely glowing as well. 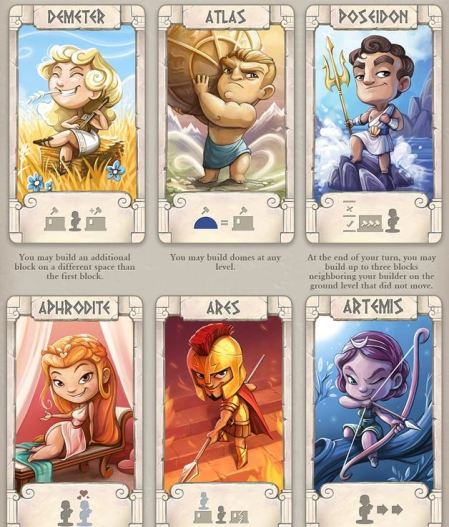 Santorini is already successfully funded, but it isn’t too late to get yourself a copy. Click here to visit the Santorini Kickstarter Campaign page!

Who doesn’t love dice, especially metal dice? Kickstarter has metal dice campaigns pretty regularly, but if you’ve missed the others this might be your chance! Unlike a lot of  campaigns though, this one states that the people behind the project will be getting their own CNC machine to fulfill their orders. Click here to check out their campaign page!

Colosseum is a modern classic that is incredibly difficult to find, and if you do find one it’s usually incredibly expensive and, of course, used and possibly missing pieces. Enter the Emperor’s Edition of Colosseum! From the campaign:

“Colosseum is a game about being a Roman magistrate charged with hosting a series of shows for the people and Roman nobles, with a chance that even the Emperor himself will visit your performance.”

“You’ll earn wealth and prestige for the shows they host, using your rewards to perform greater and more elaborate spectacles than have ever been seen before. You will need to manage your resources to improve your arenas, hire performers, contract scripts, and lure the Roman Nobility to your shows.”

The campaign promises some neat exclusives and has several nice upgrades courtesy of unlocked stretch goals. The Emperor’s Edition also has metal coins!

Click here to check out the Colosseum Kickstarter Campaign page!