During the last few weeks I’ve had the opportunity to play some great games! Some of them are classics that I’ve played many times like Tokaido, Stone Age and Say Anything, while some were new to me. As always I will focus on the new gaming experiences here.

Wow! I backed Tides of Infamy during its Kickstarter Campaign last year based solely on its aesthetic appeal, but I had no idea just how beautiful and well-crafted the game would be when it arrived. Tides of Infamy has some of the highest quality components I’ve ever seen: a sturdy, full art deck box simply for holding the game’s cards when not playing, plastic ships that hold game components during play, incredibly thick game tiles, and linen cards.

Blake and I sat down for a 2 player game of Tides of Infamy. My noble, brave red fleet faced off against his vile, cowardly, heinous black fleet. One can also see the neutral, white Ghost Ship in the image above. The Ghost Ship moved during special Pirate Luck cards and can affect the players when it enters the same tile or space as a player. Of course, I was the only one ever hit by the Ghost Ship.

In Tides of Infamy players use their 3 ships of differing sizes and strengths/weaknesses to explore the map and claim treasure. The ships are also used to do battle with one another. In the image above you can see my red, goods-laden Sloop of war square off against Blake’s Bilander. My Man of war can be seen on the right side of the photo carrying a valuable piece of treasure.

Close up of the engaged ships during a battle

Battles are accomplished by way of a poker style game played using cards with 6 different suits, each with cards numbered 1 through 6. There are 11 different combinations of cards that, similarly to Poker, vary in rank. The best combination is called the ‘Red Sky’ that consists of “Five matching cards of one rank (numbers)  and with five different suits”. The worst is the ‘Stink Pot’ which consists of “Five unmatched cards”.

During battles there are chances to bluff since ships have an opportunity to surrender at certain points. The cards are laid down in phases that allow for this bluffing opportunity. There are wild cards in the form of Sea Dragon cards, and different ships get to choose from more or less cards depending on the size of the ship and whether or not the ship is the attacker or defender.

The tiles are gorgeous and varied in their traits, the components are top-notch, and the game play is both fun and stressful. I am looking forward to playing Tides of Infamy with more players.

Outcome – Blake’s ships got lucky early and found the islands which produce the treasures used to score. On top of that, Blake successfully bluffed me out of battles that I would have won and beat me fair and square during fair fights. He won pretty handily and then made me walk the plank.

Roll for the Galaxy 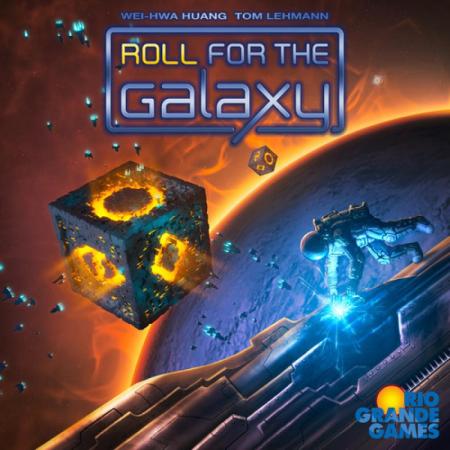 I never played Race for the Galaxy, the card version of Roll for the Galaxy, and the latter looked so complicated that I could never motivate myself to give it a try. Shame on me, seriously! Roll for the Galaxy has, in a matter of weeks, become one of my very favorite games. It’s fast, strategic and not nearly as complicated as it looks. The game comes with a ton of tiles that represent new worlds and technologies, and every game is very different from the last due to this. Strategies must be formed and changed on the fly, and the same tactics will not necessarily work from game to game.

Trudi, Jess, Tim, Blake and I recently played a 5 player game of Roll for the Galaxy at our Board Game Night. 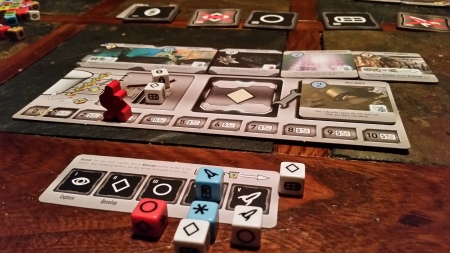 Not as difficult as it looks…

The players’ tiles, both starter tiles and those found during the Explore Phase of the game, determine both the abilities and the dice at the players’ disposal. The different colored dice specialize in different things with some being more likely to explore and other being more adapt at transporting goods during the Ship Phase. There are also bonuses for using certain colored dice in conjunction with matching colored tiles, but we won’t get into all of that here.

The game comes with a huge bag of tiles, ensuring that every game is different, and a whole bunch of custom dice. The components are great and the game is quite simply a ton of fun to play. I have enjoyed every single game of it I’ve played; even the ones I’ve lost. During our Board Game Night game of Roll for the Galaxy Blake and I were the only ones at the table who had ever played the game before.

I got lucky during my exploration and got some great random tiles that worked well with one another, allowing for some fantastic combos. My civilization (made up of the tiles) was high scoring, and my dice (ships) were able to complete a lot of high yield trade runs to my planets.

Outcome – I was able to win this game, but due in large part to the inexperience of the other players at the table if I’m being honest. They are all great, strategic gamers.