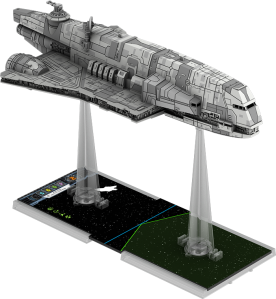 For those of you that play the Epic format for X-Wing, this is probably old news for you, but the Empire is slated to get their next huge ship soon! This time it comes in the form of the Imperial Assault Carrier, which is (as usual) an amazing looking ship! The Assault Carrier can deploy additional ships, and comes with a plethora of new upgrade cards (26 total, 21 that are only usable on huge ships).The carrier itself will open up new gameplay, as it can be equipped with Docking Clamps which allow it to deploy up to 4 TIE Fighters, TIE Interceptors, TIE Bombers, or TIE Advanced. The only restriction is that each one has to be of the same type. I have not yet seen how deployment works, but this is sure to liven up your epic games by deploying a squadron of fresh fighters onto the field at the perfect moment! This expansion also comes with a new campaign set to spice up your epic format games. There are also 4 new aces for the TIE fighter, that are sure to change up swarms for those of us that still love to run around the board with a ton of ships.

So, starting with a few of the talked about Huge ship upgrades, my favorite one is probably Ordnance Tubes. This upgrade lets you ignore text on missile and torpedo ordnance about discarding it after use – meaning you get unlimited ammo! This upgrade is nice on the Assault Carrier – but it is even nicer on the Raider, since it is not limited to a single ship. There are also many other upgrades included to buff up your Raider such as Automated Protocols (free reinforce or recover action) or Optimized Generators (allows you to gain energy when assigning energy to an upgrade card).

When it comes to the new TIE fighter aces, all of them are going to fit nicely into a swarm or mini-swarm build. With abilities that allow you to deal a guaranteed damage by canceling dice, sharing elite pilot talents, or gaining additional dice based on the target’s existing damage – they are sure to open up tons of possibilities for your swarms. My personal favorite is going to be Youngster, who allows all ships within range 1-3 the ability to use his elite talent. This means your entire swarm gets an elite upgrade with the costing you the points! With elite talents such as Expose or Squad Leader, suddenly you are able to gain a whole new level of flexibility and lethality that you have not been able to do with TIE’s in the past.

All in all, this expansion is looking like (another) must buy for any Imperial players for both Epic and Standard play. Once this is released ol’ Matt is going to have to dust off his rebel ships and play some games with me and we will try to post up some battle reports!

On a side note, I have been absolutely swamped with work and other things in life and have not had any time to play any games lately… but hopefully thats all gonna change soon and I will be a lot more active on here. Look for some more list building with the newer ships as soon as I get time to play with them, as well as a lot more Armada stuff with the release of wave 2!