Ayden, Dagon (my sons) and my wife, Maile, join me at the living room table for a cooperative game that we are way late to the party for! I am considering this game training for my kids for when the new Monolith Conan game arrives!

The four of us start the game having never played it or seen anyone else play it, but I had read the rules thoroughly and watched a couple of videos. I later found out that we did some things wrong, both to our advantage and disadvantage, but we had a good time!

We start the game and I am surprised to see how much reading aloud is required at the beginning of the campaign. My voice actually starts to crack and I have to take a water break (yeah it’s that much reading aloud/I have a wimpy throat) before I finish the opening narration.

We bumble our way through encounters against rats, centipedes, and tons of roaches and make our way to the tree in the castle’s courtyard, the destination for the first mission of the campaign.

Outcome – We beat (sort of and barely) the first scenario of the campaign, and thoroughly violate the children’s bed time for the night!

One of the highlights of my week; Board Game Night. Ayden and I go it alone while Maile and Dagon stay at the house. We join another regular at Board Game Night, Monty, and his son and nephew/son’s friend/cousin/whatever. Another regular’s son joined us for the first game as well but then split off from our merry, little group. That makes for a total of two adults, 1 preteen, and 3 children. 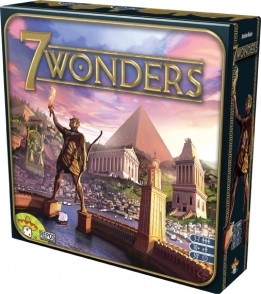 First up is 7 Wonders. Ayden and I were the only two of the six players to have ever played. I did my best to remember all of the ins and outs of the game, but I had never taught the game before. With 3 children at the table I had my work cut out for me.

CONSTANTLY, and I mean CONSTANTLY, turns would devolve into this before/during/after the card passing portion of the draft:

Me – Everyone should have the exact same number of cards…

Me – Everybody stop what you’re doing and let’s figure out who didn’t pass the cards...

This made the game a little frustrating and slow but I feel that I did a good job of being patient (pats self on back) and explaining the game to the best of my limited ability. The children were successfully herded to the game’s conclusion as Monty and I struggled to keep them straight.

Outcome – Monty’s kid, who is approximately 10 years old, barely edged me out. It was a close ending… seriously, it was…  maybe he’s highly intelligent for a 10 year old, you don’t know! Shut up!

After 7 Wonders the same group minus the bonus child play Evolution. I LOVED Evolution the first time I played several weeks earlier, and I was very much looking forward to playing it again. Once again, only Ayden and I had played the game before. Once again, I attempt to teach everyone the game.

I make a defensive herbivore species with Horns who can also grow in population rapidly. The higher your population the more they can eat, the more they eat the more points a player scores at the end of the game. Surprising, my horned species survives and thrives for the entire game. The other players play a few carnivores, but the meat eaters die off pretty quickly as the species evolve and develop traits that protect them from predators. The whole game is really a herbivore-fest.

This game isn’t even close; Ayden and I dominate the landscape.

Outcome – Through a misplayed rule that we later find out would have lent him defeat, Ayden barely trumps me. I, however would have won had we played correctly, which means I was technically correct… the best kind of correct! </Futurama joke>

Another fun couple of nights spent around some fantastic board games. If only I could escape with a victory over the hordes of children I am constantly playing with!