The “Earth Elemental” Reaper Bones miniature primed and ready to be painted.

Painting miniatures is a great way to relax, and there’s so many great games that come unpainted. Bones miniatures are well made and inexpensive, and that’s why they’re a great way to practice painting. Now, I’m not what I would call an expert painter by any means, but I’ve been learning a lot of techniques from far more talented painters that I used on the Earth Elemental. I thought other beginner miniatures painters might be able to find the information useful, and so I’m sharing.

The miniature painted with a metallic base coat.

After priming the Earth Elemental with a flat grey spray primer I painted on a base coat of a metallic paint using a regular, full sized brush. For the metallic base coat I covered the entire miniature. 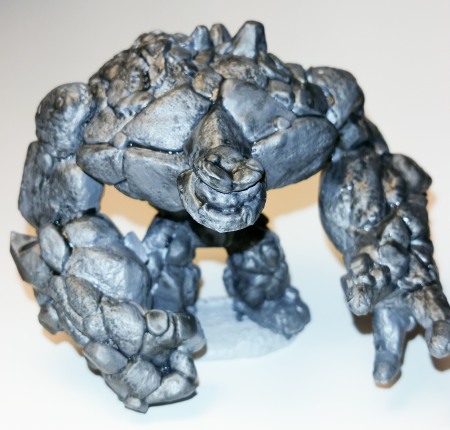 A dark, flat gray paint and dark wash over the metallic base coat.

After the metallic base coat a gray paint was placed fairly liberally using a heavy dry brush technique. This allowed some of the metallic base coat to shine through still. If you’re not familiar with dry brushing I would recommend watching a video on it, however, here’s a brief description; after dipping the brush in paint, wipe the majority of the paint off leaving only a very thin layer left on the bristles. Lightly brush the paint onto the desired surface. This will allow some of the undercoat to still show through.

Next, I used a Nuln Wash (a dark wash thinner than paint) and slopped it onto the model heavily, allowing the wash to seap into the cracks of the model as well as leaving some on the larger faces.

A lighter gray paint was applied next. The photo was lightened the show a little more contrast. See the final picture for the actual colors.

Using the same dry brush technique as mentioned before a lighter gray paint was applied. This produced a nice, genuine rock effect. The only thing left after the rock texture was the base and the details. 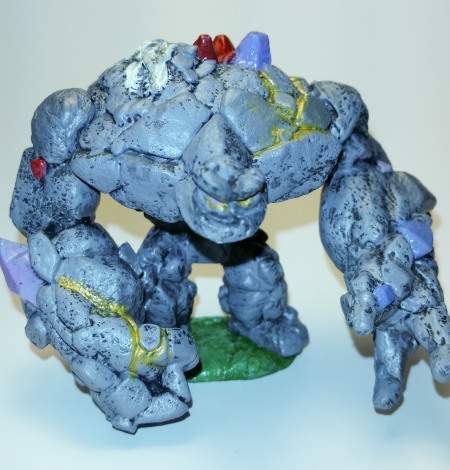 Finally the details on the Earth Elemental were painted on. A metallic gold paint was used in the cracks to form gold veins. For the crystals on the back and arms different gemstone-colored paints were used. After the crystals were painted a clear, glossy wash was used to make them look shinier and more crystalline. The based was colored using two different greens. Finally, the dinosaur fossil on it’s right shoulder was painted using shades of white and a little more Nuln Wash.

If you’ve never painted a miniature before, I highly recommend the Bones “Large Earth Elemental” because it’s large and doesn’t require a lot of fine detail painting. If you haven’t tried painting miniatures before it’s a great way to de-stress. Your FLGS might even have some sample paints for you to experiment with, so give it a try!