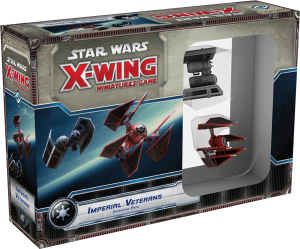 FFG just recently announced another new expansion for X-Wing, and this time it brings Imperial players more pilots and upgrades for their TIE Bombers, and Defenders! The expansion is called Imperial Veterans – and is structured the same as Imperial Aces was. It includes 2 new models, with variant paint schemes (Gamma Squadron for the Bomber, and a mean looking red paint scheme for the defender) as well as a host of new pilots and upgrades to modify and make these ships more versatile. For example, with the new TIE/x7 Title for the Defender, it removes ordnance in order to make the ship gain a free evade when moving at speed 3-5. Changing the Defender into a dodgy fighter craft instead of the larger turret/bomb carrying ship it is now. There isn’t too much else released at this point, but this expansion looks like it should breath a bit of new life into the older ships and make them a bit more competitive in the current meta. Check out FFG’s announcement here!